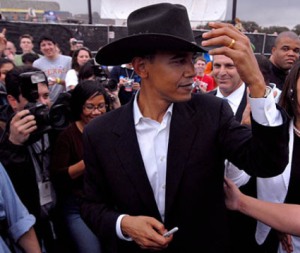 Here are several labels that have recently and often been applied to Obama: pragmatist, bipartisan, compromiser, and centrist.   The Republicans take no prisoners strategy regarding the stimulus package–which has been driven not by concerns about pork, but by an ideology that still affirms that the market always knows best–has depended on using Obama’s bipartisanship to their advantage.  They typically view him as someone whose pragmatism guarantees a willingness to compromise and operate in a bipartisan fashion.  And yes, it’s true,  Obama would prefer bipartisan solutions.   But be not confused, Republican comrades, pragmatism and bipartisanship are not two sides of the same coin.

Obama, as I have argued elsewhere, is not only a political pragmatist, but a philosophical one.  Two points here:  1) Philosophical pragmatists are not dogmatists; they are falibilists who are suspicious of those who claim to possess certainty in political and ethical matters.  2) Broadly speaking, pragmatists seek what works.

Much confusion is possible regarding these points.  One might think that if someone doesn’t believe in certainty and also looks to what works, he isn’t deeply committed to any values.  This is specious inference.  Pragmatists can be deeply committed to any number of values.  They just don’t think that they have a direct line to the Deity regarding the truth of these values.

So, then, how does this relate to the Republicans’ misreading of Obama?  Republicans have been assuming that Obama’s desire for bipartisanship and compromise is at the heart of his pragmatism.  If they push hard enough, his pragmatism (read: desire to get things done “only” through compromise) will win the day for them.  They will be able to hold back the tide of reform.

But bipartisanship and compromise are strategies and goods, not absolute goods for the philosophical pragmatist.  The pragmatist respects them because they speak to his or her commitment to fallibilism and community, and because they might help us get the job done.  However, if they are failing as strategies to achieve pressing ends, a philosophical pragmatist will not hesitate to engage in triage.  If people don’t have jobs and are without medical care, if the economy is in a death spiral, well, we have an obligation to address these problems.  Be nice to do so through having everyone on board, but we can always return to pursuing bipartisanship another day.  It’s a good, not The Absolute Good.

If bipartisanship is not working as a strategy to get the stimulus package through, which Obama deeply believes is necessary for the well-being of the country, his political and philosophical commitments, and temperament, will move him to turn his energies to figuring out what will work.  And what will work here may turn out to be an offensive against recalcitrant Republicans whose failed policies cost them two elections, 2006 and 2008.  And you know what, he’s got the upper hand if he makes this move. (Republicans might think that Obama wouldn’t dare because he will need them down the line.  However, if they aren’t playing ball now, he can’t be sure they will do so down the line.)

A piece of advice to Republicans:  Don’t push this guy too hard.  You are dealing with a mindset that you haven’t seen in a couple of generations. You will end up regretting it. (He’s perfectly capable of wearing the black hat.)

(Image from The Boston Phoenix)

UPDATE, February  9th, 2009, PM.  The following is an excerpt from The New York Times of Obama’s first press conference as president:

So my whole goal over the next four years is to make sure that whatever arguments are persuasive and backed up by evidence and facts and proof, that they can work, that we are pulling people together around that kind of pragmatic agenda. And I think that there was an opportunity to do this with this recovery package because, as I said, although there are some politicians who are arguing that we don’t need a stimulus, there are very few economists who are making that argument. I mean, you’ve got economists who were advising John McCain, economists who were advisers to George Bush — one and two — all suggesting that we actually needed a serious recovery package.

And so when I hear people just saying we don’t need to do anything; this is a spending bill, not a stimulus bill, without acknowledging that by definition part of any stimulus package would include spending — that’s the point — then what I get a sense of is that there is some ideological blockage there that needs to be cleared up. [emphasis added]

Taking on Critics, Obama Puts Aside Talk of Unity

“It is not too late to craft a bipartisan plan that creates more jobs and helps get our economy back on track, and Republicans stand ready to work with the president to do this,” Representative John A. Boehner of Ohio, the House Republican leader, said after the news conference.

For his part, though, Mr. Obama seemed to suggest it was too late, and that the time for bipartisanship lay further down the road. He said he recognized that some Republicans had good-faith doubts about his program, but he also characterized some of the opposition as an effort to “test” the new president.

(Baker’s article, which includes discussion of the press conference, is worth a read.  It’s clear that Obama’s pragmatism does not require him to stick to  “bipartisanship” and that the Republicans are about to find out that they have overplayed their hand.   Poor Boehner, the Republicans’ goose egg vote in the House, of which he was so proud, is coming back to haunt him.)

Now that a mammoth, $787 billion economic stimulus bill has been approved virtually without Republican support, White House advisers have determined that Capitol Hill horse-trading with GOP opponents wasn’t successful and that Obama should instead tap his immense popularity and public salesmanship skills to push legislation in the future, the Washington publication Politico reported Saturday.