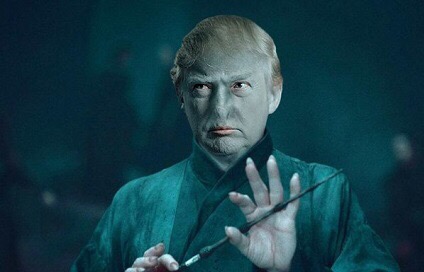 I suppose we are all tired of hearing about how crazy Trump is, whether you are a supporter or an adversary.  But however crazy Trump might be, he isn’t crazy enough to nuke the world.  No one as narcissistic as The Donald would want to lose his audience.  I mean, who would read his tweets?  Nevertheless, the danger that Trump represents is real and present, and a very old one.

When you go to buy a used car, you expect a certain degree of, shall we say, exaggeration from the salesman.  There are limits, however.  If a used car salesman told you a car had six cylinders when it only had four, or new brake linings when they were dangerously thin, he could get into some hot water.  And you wouldn’t want to buy a car from a salesman who exaggerated, lied, in this fashion.

Now with politicians we also expect a degree of exaggeration; fibs and self-serving white lies are part of the game.  But presumably there are limits to what is considered an acceptable exaggeration by a politician in a democracy.  This certainly isn’t a startling revelation.  However, it’s worth placing this prosaic observation in a broader context before turning to Trump.

Hannah Arendt often spoke about the Ancient Greeks, specifically, the Athenians.  Her treatment was idealized.  Nevertheless, she had important things to say.  A key to the success of Athenian democracy was the willingness of citizens to step forward, speak their minds publicly, and debate.  In our parlance, to step up to the plate.  By doing so, they could become known for great words and deeds.

The willingness to speak out and take a public stand is the lifeblood of not just a democracy, but any political life worth having, according to Arendt.  But she also claimed that Truth was problematic for politics.  Why?  Because political discussion ceases if some people claim to have the Truth with a capital T.  No one can argue or debate with someone who claims that two plus two equals four.  It’s a Truth.   If political convictions have the same character, there’s no point in discussing and debating.  There is no point in speaking out and engaging others, because debate is futile.  The answer is known.  In other words, Truth, or the belief that we have the Truth, strangely enough, can kill political life insofar as it involves debate and discussion.  It is the ultimate hegemon.  It ends conversation.

Please don’t misunderstand.  This is not a prescription for lying or ignoring facts.  It’s one thing to say that we are fallible and we have to recognize that our positions may be wrong, that political “truth” doesn’t have the certainty of arithmetic.  It’s quite another to wantonly lie, which isn’t solely a problem of morality, although it’s certainly that, as recognized by religions throughout the world.  It’s also a political problem.  Morality and politics are intertwined here.  Let me draw on another Arendtian idea to address the connection.

Moral and political actors should be willing to debate others.  They should also expect to have arguments with themselves.  That is, they should expect from time to time to take different sides of various questions, think them through, and try to figure out where they stand.  Of course many of our ideas are quite settled, so we don’t regularly debate every notion with ourselves.  But if we are not ideologues, presumably we should be open to considering different sides of different issues, even those that challenge positions that we have held over the years.*

However, in addition to public and personal (interior) dialog, we also expect a degree of consistency in political and moral actors.  We expect that they will not continually contradict themselves.  If they did, it would be like talking to different people on different days.  A person could say, I thought abortion was okay yesterday, so I gave a lot of money to pro-choice groups, but today I think it should be illegal, so I’m going to block entry to abortion clinics.  If someone is chameleon, it doesn’t matter which shade he or she is currently enjoying.  There isn’t a commitment, which grounds a sense of responsibility.  For Arendt, consistency involves being true to ourselves, being able to say: those were my words and I take responsibility for them.  Without explanations, without reasons being offered for changing views, we would be right to distrust chameleons.  No consistency.  No lasting convictions.  No trust.

But wait.  Didn’t I say earlier that Truth was problematic for political life.  Why then can’t we just change our minds all of the time if we aren’t worried about Truth?  So, here’s the seemingly paradoxical and deep challenge for democracies: citizens need to be able to avoid ending political conversations by declaring that they have the Truth, with a Capital T, while simultaneously understanding that this isn’t a free-for-all regarding lying, or changing one’s position in arbitrary ways.  As political actors they have to believe in truthfulness, which involves heeding facts, but not truth with a capital T.   Moral and politically trustworthy actors seek to be truthful and consistent.  Or perhaps a better way to say this: they are reasonably consistent, and when they change their minds they give reasons for why they have changed their minds.  These changes should involve an interior debate in which we temporarily divide ourselves into different voices, arguing different sides, while we try to figure out the correct path, but eventually we should try to behave like unified agents responsible for our words and deeds.  And we should do this without declaring that we have the Truth, as seductive as this might be, because this will end discussion, with others and with ourselves.  In other words, in the political world we should aim to be truthful and trustworthy, not oracles of Truth.

Enter Donald Trump.  Although he is obviously not the sole cause of the many trials and tribulations that we face in order to make our democracy function, he is clearly a grave threat.  You can see the problem.  Trump is deeply untrustworthy, but speaks as if he has the Truth.  He not only changes his mind from one day to the next, he often lies while doing so, lies that frequently involve denying the very words he recently spoke.  Instead of presenting himself as an exemplar of civic democratic virtue, he fosters the view that all we can expect from presidents and politicians is that they behave like the worst kind of used car salesman, namely, those who blatantly lie to us and change their stories to get what they want above all else: to close the deal.  To accept Trump’s course is to say, I don’t give a damn if politicians contradict themselves, which is a position that makes words meaningless, and which also ends the game of democracy.  In this situation, we lose.  Plato will have been proven correct about democracy.  The masses simply cannot be trusted when it comes to understanding how political leaders should behave.  They will accept empty rhetoric, with contradictions galore, in the place of arguments and reasoned discussion, if it suits their momentary inclinations.

I would very much prefer that Plato were wrong about this, but The Donald is making it tough.  Trump is not merely a man who happens to be president.  He is an exemplar of an antidemocratic sensibility.  He doesn’t question himself and he doesn’t want you to question him.  This is the essence of authoritarianism.  The anti-political cancer that is Donald Trump cannot be allowed to metastasize if we are to retain any hope of living in an America with a meaningful political life.

*  I except here political doctrines that are so problematic that they are inherently anti-political, for example, fascism.  They violate the very premises of political life by making political actors into apolitical cogs and immoral agents.  And the same goes for unethical behavior such as murder and genocide.  These are not open to debate.