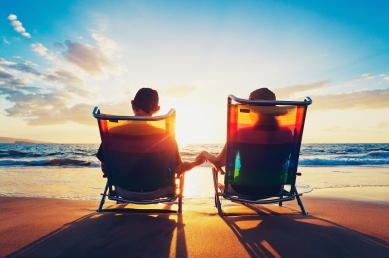 Ah, retirement, the American Way.   We may not be able to know about an afterlife.  But worry not.  We’ve got the next best thing, maybe even a better thing, because it will happen a few years down the road.  Work hard, play by the rules, trust in the management, and golden years await: lounging on beaches, watching the sun turn a cool red, frozen margaritas in hand.  Your earthly reward brought to you by a system that never stopped believing in its ability to sell happiness as a birthright.  And with modern medicine, those years could last two or three decades, maybe longer.  The endless summer.  That’s progress.

Yet, without money, no honey.  Once upon a time, the ticket for many was a pension.  Not so much these days.  Pensions are old hat.*  The magic of the market is the ticket to the future.  One no longer needs to join a union that campaigns for pensions or improved retirement packages.  One has the the power of the 401(k), which allows that wonder of the modern world, the stock market, to work for you.  Yes, the market is your traveling companion, your co-pilot, along the highway to the future retired you.

Yet, something is amiss.  It seems that “even the ‘father of the 401(k)’ ” has reservations about it, as reported by CNBC, NBC’s business news arm.

”[Many early backers of the 401(k)] say it wasn’t designed to be a primary retirement tool and acknowledge they used forecasts that were too optimistic to sell the plan in its early days,” The Wall Street Journal reports. “Others say the proliferation of 401(k) plans has exposed workers to big drops in the stock market and high fees from Wall Street money managers.”

Even the “father of the 401(k),” Ted Benna, tells The Journal with some regret that he “helped open the door for Wall Street to make even more money than they were already making.”

Other experts agree: On its blog, the Economic Policy Institute recently declared 401(k)s “a poor substitute” for the defined benefit pension plans many workers primarily relied on, which provide a fixed payout for employees at retirement, and which have now become increasingly rare.

Let it not go unnoticed that 401(k)s and IRAs have made prospective retirees ever more dependent on the stock market, which leaves out about half of American households, because they don’t own any stocks.  As reported in the Grey Lady herself,

Roughly half of all households don’t have a cent invested in stocks, whether through a 401(k) account or shares in General Electric. That leaves half the population with some exposure to financial market whims, but as Mr. Boshara said, “some exposure can be 100 bucks.”

And earlier in the same New York Times article we learn,

A whopping 84 percent of all stocks owned by Americans belong to the wealthiest 10 percent of households. And that includes everyone’s stakes in pension plans, 401(k)’s and individual retirement accounts, as well as trust funds, mutual funds and college savings programs like 529 plans.

“For the vast majority of Americans, fluctuations in the stock market have relatively little effect on their wealth, or well-being, for that matter,” said Edward N. Wolff, an economist at New York University who recently published new research on the topic.

So, sadly, about half of us aren’t able to use the magic of the market to fund our leisure years, and most of the money in the market belongs to a small sliver of the population.

This is not a comforting news, especially as retirement has become national obsession.  One can’t escape stories about how to plan for the inevitable, often filled with ominous warnings and stern advice.  If you haven’t read these stories, be prepared to be read the capitalist riot act, which in this Forbes article, “Top 10 Most Regrettable Mistakes Retirees Made In Their 20s,” is framed as advice and a warning to those currently in their twenties:

#1 Thinking You Know Everything
#2 Delaying Saving
#3 Missing Free Money (“Many companies will match contributions to your 401(k) plan.”)
#4 Saving Too Little
#5 Using Retirement Money Before You Retire
#6 Investing Too Timidly
#7 Investing Emotionally
#8 Failing to Plan
#9 Believing Everything Will Go According to Plan
#10 Giving Up

The article ends with this sage advice:

And retirement is a goal you get only one real shot at.

It’s the one you most want to achieve.

So, make a commitment that you will respect the knowledge of your future and avoid these ten mistakes.

Never underestimate American capitalism’s desire and ability to blame the victim.  You don’t have enough money to retire comfortably?  Well, you haven’t been thrifty, you invested emotionally or didn’t plan well.  Or maybe you just gave up.  Let’s face it, you deserve that shabby Medicaid nursing home.  (And you youngsters in the audience thought your parents were scolds.)

Let’s suppose we really wanted to do the right thing, follow the sage advice of those telling us to invest now and live well later.  How much would we need to fund a comfortable retirement?  An often cited figure is one million dollars, although others say one and a half to two million, which sounds like a lot, and it is lot for most Americans, but as we are warned over and over and over, one must consider all of the potential expenses, including medical care and nursing homes, which can easily cost $100,000-$150,000 a year.  (Imagine both you and your spouse needing one.)  What would it take to achieve this kind of retirement nest egg?   Keep in mind here that the median household income was  $63,179 in 2018.

CNBC calculated the amount you need to earn annually in order to save $2 million by 65 by putting 10% of your earnings into investments.

If you don’t achieve this goal, or even, say, half this amount, $1,000,000, keep in mind what the Forbes piece told us about why we fail to achieve our retirement goals, for example, by:

It’s clearly on us.  We must invest wisely and stick with the program.  Of course with a median household income of $63,179, you can be as thrifty as the day is long and never save 2 milllion.  And even at around $105,000 a year, under the best scenario listed, you have to start at 30 years old.  By the time you are forty, we are told, you will need about $252,000 a year for the best case scenario, and close to $467,000 a year for the worst case listed, a 4% rate of return, which is more than bank savings accounts currently pay.**  (Student debt and high healthcare costs undermining your savings ability?  Sorry.  That’s the way the cookie crumbles.  Oh, and let’s not forget that the younger you are, the more you will have to worry about inflation returning and eating into the value of your nest egg.)

This is an impossible system for most Americans.  Social Security doesn’t pay enough and the only alternatives appear to involve investing in the market, real estate, or working longer.  But most people either don’t have enough money or experience to make investing a viable option for guaranteeing a comfortable old age.  This leaves real estate, namely, your home if you own one, or working longer, which may not be a viable option due to injury or illness.***  (Regarding the necessity of working longer: so much for retirement.)  Big money and its lobbyists have assured capitalists of favorable conditions for investing, including, of course, tax breaks.  Now they have a retirement system in place that makes the market a key ingredient in achieving truly comfortable golden years.  The house, as they say, always wins.

Forget the beach.  With this system, be happy if you have a decent roof over your head, clothes on your back, and enough to eat.  And try to make sure that you don’t need a nursing home.

Golden years?  Tin is probably the metal in play here.  Unless, of course, we do something smart and expand Social Security, provide Medicare for all, and cover nursing home costs so that we don’t bankrupt so many of our fellow citizens.  And while we are at it, let’s lift the burden of student debt off of the backs of future retirees.

Hey, it’s America.  I get to dream about a better world and true progress.

*** Thinking of annuities?  You will need a nice chunk of change to buy annuities that pay any significant amounts.