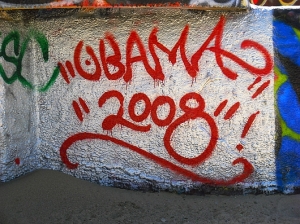 You may think that I support Obama because of his policies and character. Yes, it’s (mostly) true. But these are really trivial reasons compared with the deeper reason.

You see, I know Obama. Okay, well, maybe I don’t know him. Let’s say that I understand him. Or better, I understand something very important about him. It’s a name thing. This may not seem like much, but I can tell you that for those of us who grew up with names that are three or more syllables, and with at least as many vowels as consonants, Obama’s arrival portends a new day. Just his name will change the lives of millions of Americans. Let me explain.

My last name is Aboulafia. (It is pronounced the way that it looks: A boo la fe a.) A little autobiography will be helpful here. I was born in the U.S. As a matter of fact, my ancestors on one side have been in the U.S. for about a hundred years, and close to a hundred and fifty on the other. I know, not the Mayflower crowd, but I can assure you that I don’t speak English with a foreign accent. (Please bear with me. This will prove important.) Here is some further information. I am 6’4″, fair complected, with a short reddish beard. When I went to college in Denmark for a term, I was sometimes taken for a Dane.

During my time in Denmark, I took a trip to Morocco. The kids on the streets in Moroccan cities would often ask tourists for money, and they could do so in many languages. They would always ask me in English. Not having much money myself, I tried playfully to trick them by telling them that I didn’t understand. I was Danish. I even threw in a few Danish words. But the kids wouldn’t buy it. They laughed, giggled, and said, “No, no, American. You American, American.” So somehow these young Moroccan kids were able to spot me as an American, not a Dane or an Englishman, a German or an Italian, etc. (And I ended up with a few less bucks in my pocket.)

Okay, why do I bring this up? My last name is Sephardic, a name that Spanish Jews took a millennium ago when they lived in Spain with the Arabic Moors. It is not a “typical” Western European name. It sounds, well, just plain weird to a lot of people in America. As a matter of fact, the name itself sounds so exotic that in spite of the way that I appear and speak, Americans have often asked me where I was born, that is, in what country other than America. All they had to do was discover my last name. This would happen at check-out counters or in stores, for example, when I produced a credit card. “Aboulafia, Aboulafia? Hmm, so what country were you born in?” I would reply, often rather defensively, “Here, in America. Uh, my mother and father were born here also.” (Why I felt I had to tell a perfect stranger about my parents is part of the weird name inferiority syndrome.) When I was younger, sometimes even teachers would ask where I was from. My name, and just my name, mind you, put my nationality into question. And this would happen in spite of the evidence (me) standing and staring the questioner in the face.

So now along comes Barack Obama. And I am waiting. I figure, okay, this guy is really good, but they are going to say that he isn’t a real American. He won’t have to open his mouth. People will just look at his name. “Obama? Obama? Where was he born? Bet he’s not a real American.” He’s going to be O-U-T before he gets a chance at bat.

And then it happened. He manages to get over enough hurdles, including his name, to win the Democratic nomination. And I am thinking, “Obama, the name–three syllables, with as many vowels as consonants–is going to transform life here in the good old U.S. of A. for multi-syllabled, funny named persons.” You may think that this is a small matter. It isn’t. There are a lot of us. And we are growing in numbers every year. With the rise in immigration, strange names from all over the world have increased in America in the last decades, including ones with only one syllable.

So, three cheers for Obama, a man with a handle who as president would make many of us feel more at home in our own country. And if enough of us funny named folks vote for him, he will get a chance to do so.