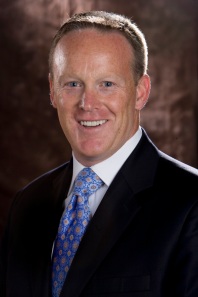 Diogenes searches for an honest man     &   Sean Spicer, a man who will not end Diogenes’s search

Misrepresenting a person’s words or actions in order to score a political point is a form of lying.  Of course we know that political ads do this sort of thing regularly.  It’s wrong but no one can do much to stop it.   And there appears to be no limit to how far political operatives are willing to go, for example, distorting the presentation of a lawyer arguing a case before the Supreme Court.   Here is an excerpt from a recently published article from Bloomberg, “Republicans Tampered With Court Audio in Obama Attack Ad.”

In the web ad circulated yesterday, the Republican National Committee excerpts the opening seconds of the March 27 presentation of Obama’s top Supreme Court lawyer, Solicitor General Donald Verrilli, in which he is heard struggling for words and twice stopping to drink water.

Obamacare,” the ad concludes, in words shown against a photograph of the high court. “It’s a tough sell.”

A review of a transcript and recordings of those moments shows that Verrilli took a sip of water just once, paused for a much briefer period, and completed his thought, rather than stuttering and trailing off as heard in the edited version.

The ad marks a blurring of the line between the law and politics, in which the nation’s highest court — and the justices and lawyers who decide and argue cases — are becoming fodder for Republicans’ and Democrats’ arguments over the validity of the president’s signature domestic legislative achievement.

RNC Communications Director Sean Spicer said the video was a “mash-up” condensing and splicing together several separate pauses and stutters by Verrilli during the first two minutes of his argument, produced to illustrate how much difficulty he had had defending the health-care law.

“Are there multiple clips in that video? Yes,” Spicer said. “The point was that he continually had to stop because he was having trouble making the case for why Obamacare was valid.”

The Bloomberg piece goes on to say,

Recordings of the court proceedings reviewed by Bloomberg News reveal that the audio has been edited. While Verrilli paused once to drink water during the opening moments of his presentation, he stopped talking for only a few seconds before continuing with his argument. In the RNC ad, he pauses for about 20 seconds, coughs, sips water and stutters.

Just think about Spicer’s defense of his ad.  It was a “mash up,” as if this is some sort of justification for manipulating the historical record.  One can easily imagine Spicer saying, “Hey, all we were doing was making Verrilli appear to be falling over his own words by changing the timing and length of his pauses and stutters.  What’s the big deal?  He should have been stuttering given what he was defending.  If I think that an opponent shouldn’t be able to make a clear argument, what’s the problem in making him appear as if he can’t?”

We are in serious trouble.  A democracy can only take so much distortion from propagandists representing major political parities– with huge sums of money to finance their machinations.  It’s bound to lead to boundless cynicism.  People will just tune out, turn off, and drop out.  But perhaps that’s ultimately the goal of the game: a population so fatigued by a system that leaves them faceless and impotent they will just let the “professionals” run the show.  Men like Sean Spicer, who like their ties with power knots.