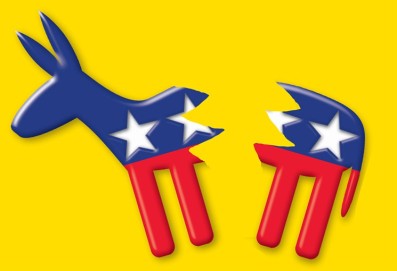 Salon, a liberal internet magazine, published a piece recently by Cody Cain, “It takes a village idiot: Thanks to Donald Trump, the president may be chosen by a fourth-grade mentality,” in which he claims:

Based on pure demographic statistics, and leaving aside the deplorable lack of ethics of exploiting others, Trump’s approach is grounded in a rational basis. The vast majority of Americans, approximately 70 percent, possess the intelligence level of only average or below, which is roughly at or below a high-school level. Only 10 percent of the population is regarded as superior or above. So Trump’s strategy seems apparent: Aim low to capture more people.

This is exactly what our Founding Fathers feared when they created this new system of democracy. They were concerned that an abominable candidate would come along and charm the masses of uneducated voters, and then the intellectual minority would be forced to suffer the imposition of an imbecile as their president.

What an extraordinarily revealing couple of paragraphs.  Forget fears people might have about the future, specifically about their children’s futures, as The Washington Post reports in reviewing a recent Gallup poll.

Trump voters tend to be older, blue-collar workers, and recent generations have had more difficulty getting well-paying jobs that didn’t require much education. Those opportunities have largely dried up. And now, Trump supporters tend to live in places where the world has gotten visibly tougher for the kids on the block. It’s easier to agree with Trump’s narrative about American decline when you have seen your own child fall down the economic ladder.*

No, insecurity is not the issue, according to Cain.  The problem is that Trump supporters are uneducated.  Well, not just uneducated, but actually slow intellectually—average or below in terms of IQ—definitely not in the 10% who are superior or above.  You know,  like the professionals who believe in all of those liberal values that the masses are just too backward to appreciate.  And our Founding Fathers recognized this backwardness, this inferiority, and rightly sought to keep power out of the hands of the masses.  [Sidebar on Founding Fathers: they permitted slavery, and allowed only men with property to vote.  Ah, the good old days, when women and blacks were seen as part of the low functioning 70%.]

We  should thank Cain for putting the elitism and arrogance of many in the Democratic establishment so concisely in a couple of paragraphs.  Of course, not so long ago this elitist nonsense would be what one expected to hear from the Republican establishment.  But now it’s also the Democratic establishment that’s singing this tune, although I expect sentiments such as these will be discussed mostly in private, because liberal folks usually, unlike Cain, know they shouldn’t say these sorts of things in public.  (Unless you are Hillary and get to have your basket of deplorables moment.)

There are many who hold out hope that the Democratic Party can still be the party of progressive social values and economic equality.  But it’s not looking good.  Clinton and her Democratic Leadership Council friends remain in charge of the party.  And the party is more dependent than ever on contributions from a corporate and professional elite.  (Don’t hold your breath waiting for a great push from the Dem establishment to get rid of Citizens United.)  The Democrats have simply become too dependent on the almighty dollar to stay in power.

On October 16, 2016 The Boston Globe published an article, “Democrats-the Party of the Professional Class?”  The article leans to answering in the affirmative.  The question mark in the title is due to the apparent inroads made by Sanders and the progressive wing of the party during this year’s primary election, which suggests the possibility that the Dems could head left.  But the weight of the evidence shows that the progressive left will have little clout in a Clinton administration on economic matters.  Why?  Quite simply, there is less and less urgency or upside for them to pursue a progressive agenda on economic matters, one which would take class seriously.  The Dems seem to feel that there are too few votes to be gained by taking a left turn, because they have already lost the white working-class.  (Low income POC are not an issue because the Dems take their votes for granted.)  Here’s the dish from James Carville as reported in the Boston Globe article.

“For years, we were in the fight for the guy in the truck with a gun rack,” said James Carville, the veteran Democratic strategist. “We lost those guys, by a rate of 80 to 20. Dukakis carried them, Hillary won’t. The best thing that happened to us is that we lost that war.”

Think Carville is not polished enough to take seriously with quips like this one?  Okay, listen to the voice of the president of the Progressive Policy Institute in the same article.

Will Marshall, president and founder of the Progressive Policy Institute, which was created in the wake of the Dukakis defeat, points to how much stronger right-wing populism is than left-wing populism — the Tea Party versus, say, Occupy. He believes the party’s emphasis should be on college-educated suburban moderates. “The swing voters who hold the balance of power in key battleground states aren’t particularly angry and don’t see the economy as rigged against them,’’ he said. “They give priority to growth over fairness and are more inclined to help US businesses succeed than to punish them.’’  (Emphasis added.)

In contrast, here are a few pertinent observations from those worried about the direction of the Democratic Party, also from the article.

[A]ccording to Michael Haselswerdt, a political scientist at Canisius College in Buffalo, “Their progressivism is moving them away from working-class voters, and the weakness of the labor movement is only accelerating that.’’

“I thought we could pull the party back into the model that was the basis of the party since Andrew Jackson: You take care of working people,” said former senator Jim Webb of Virginia, who ran a brief presidential campaign earlier this year. “But it’s gone the other way. White working people outside of unions think the Democratic Party doesn’t like them.”

“We have badly neglected the work we should have been doing for blue-collar working folks, especially men,’’ said Dukakis, who now teaches at Northeastern University. “There’s no excuse for that. These are our people. They have no business voting Republican. But you have got to take care of people and pay attention to them.’’

Now listen to Todd Gitlin, a former Students for a Democratic Society president who now is a Columbia University sociologist: “If the Democratic Party in [my student days] had the profile it has today I would have looked askance at it. I would have thought that it was not a bridge to the future. The Trump people have a right to say they have been betrayed. Nobody has given a [expletive] about them in the Democratic Party.’’

Either way, today’s Democrats have changed perhaps as much or more than the Republicans since the 1970s. “The party has been taken over by professionals,” said Gitlin. “The startling thing is that the Democrats are hardly competing for the people that Trump is claiming.’’

If these observations and concerns are close to being on target, then those who see themselves as social and economic progressives will no longer have a home in either of the two major parties.  They will be joined by Trump supporters who feel that the two major parties are not hearing their concerns.  We are in for quite a ride, and no poster saying “Stronger Together” is going to ward off the days of reckoning that will begin on 11/9.

*Here is the paragraph right before this one, which also speaks to the issue of insecurity or fear about the future.