Let’s be clear.  No one is taking chances and letting terrorists, masquerading as refugees, into the country.  The protocols the administration has set in place for Syrian refugees involve an 18 to 24 month vetting process.  We are talking about taking in 10,000 people when millions have been displaced.  France, having just suffered a terrorist attack, will still be providing a haven for 30,000 refugees.

The GOP tough guy presidential candidates are giving ISIS exactly what it wants:  fear that overrides compassion and common sense.  If we are so terrified of terrorists, we should stop every international flight into the country, because you can bet that it will be easier for a terrorist to get by the TSA than the kind of screening that is in place for Syrian refugees.  But ISIS wants us to turn away Syrians.  More refugees living in camps, more fodder for their propaganda mill, more recruits to fight the anti-Muslim Americans.

And aren’t these GOP tough guys also supposed to be Christians?  What was it that Jesus said in Matthew 25?

“Then he will say to those on his left, ‘Depart from me, you who are cursed, into the eternal fire prepared for the devil and his angels.  For I was hungry and you gave me nothing to eat, I was thirsty and you gave me nothing to drink, I was a stranger and you did not invite me in, I needed clothes and you did not clothe me, I was sick and in prison and you did not look after me.’
“They also will answer, ‘Lord, when did we see you hungry or thirsty or a stranger or needing clothes or sick or in prison, and did not help you?’
“He will reply, ‘Truly I tell you, whatever you did not do for one of the least of these, you did not do for me.’
“Then they will go away to eternal punishment, but the righteous to eternal life.”

The GOP candidates for president are an embarrassment.  Cowardly lions pretending to be tough guys.  (Hey, tough guys, remember: Home of the Brave.)  UP@NIGHT has actually found proof of their cowardice.  Here are four of the toughest of the tough guys in the way they actually appear when not in public, and their team leader. 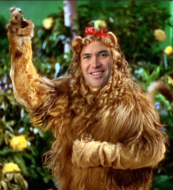